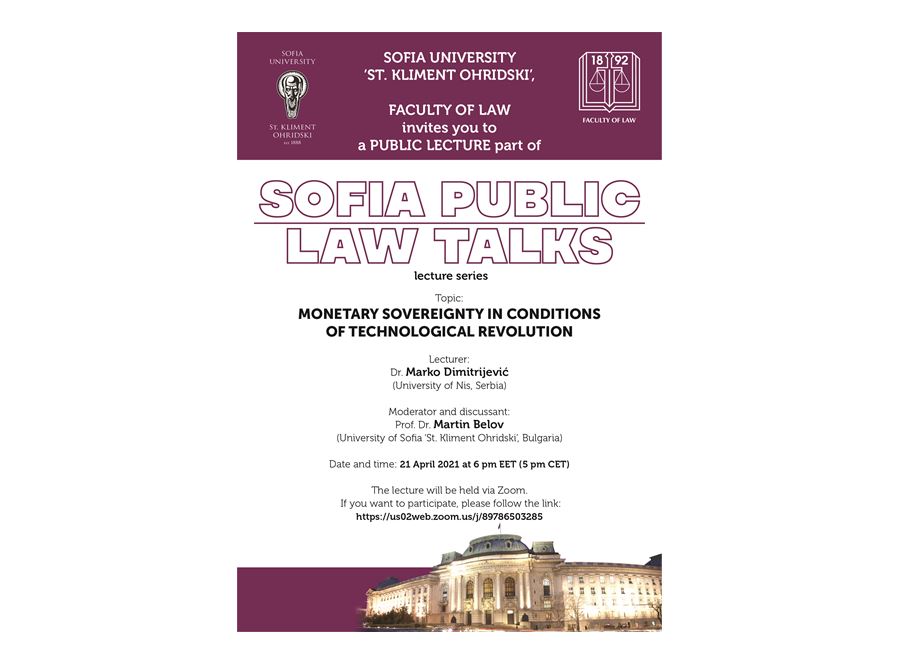 The presentation of Dr. Marko Dimitrijević will be based on his chapter with the same title that has been recently published in Belov, M. The IT Revolution and its Impact on State, Constitutionalism and Public Law, Oxford, Hart, 2021, available at: https://www.bloomsburyprofessional.com/uk/the-it-revolution-and-its-impact-on-state-constitutionalism-and-public-law-9781509940875/

Moderator and discussant of the lecture will be Prof. Dr. Martin Belov.

Here is the brief summary of the lecture kindly provided by Dr. Marko Dimitrijević.

The technological developments have fundamentally changed the traditional pattern of monetary norm implementation and invoke the real and logical need for further development of monetary law nomotechnics. The tendency for monetary sovereignty to evolve in a time of technological revolution (and become more ‘digital’) must be accompanied by a simultaneous process of evolution of central bank competencies and serous monetary legislation reform. That requires a comprehensive study about the level of development that has been achieved in central bank law, which is an independent legal discipline that exists outside the scope of general monetary law but undoubtedly must be complementary to it. This issue becomes especially relevant and gains importance in the context of increasing monetary disputes as a special kind of administrative disputes, in which we can see the full implementation of the active and passive procedural legitimacy of the central banks, who act as guardians of monetary sovereignty. The existence of legal gaps related to the under-explored link between monetary sovereignty and technological revolution (and the untimely derogation of primary sources of monetary law that would undoubtedly confirm its credible presence in the issue related with digital currencies) can have severe consequences for overall legal, economic, political stability and consumer protections. The existing monetary laws governing the work of central banks must contain provisions that regulate the supervision and control of issuers and users of digital currency (even some studies indicate that the current number of transactions made in digital currencies is still modest). The reason for the proposed provisions lies in the fact that it is always better to have a legal rule that will allow the implementation of monetary sovereignty in the process of issuing digital currency, even though it may not be applied in many cases (since it may not be necessary), than to have a legal gap in the segment of the central bank’s control mechanism in that area (the implementation of such provisions would not have been economically costly from the point of an economic analysis of law if it had incorporated in positive monetary legislation as a security benchmark). It is difficult to imagine that in a dynamic technological context, such a provision would remain without implementation.