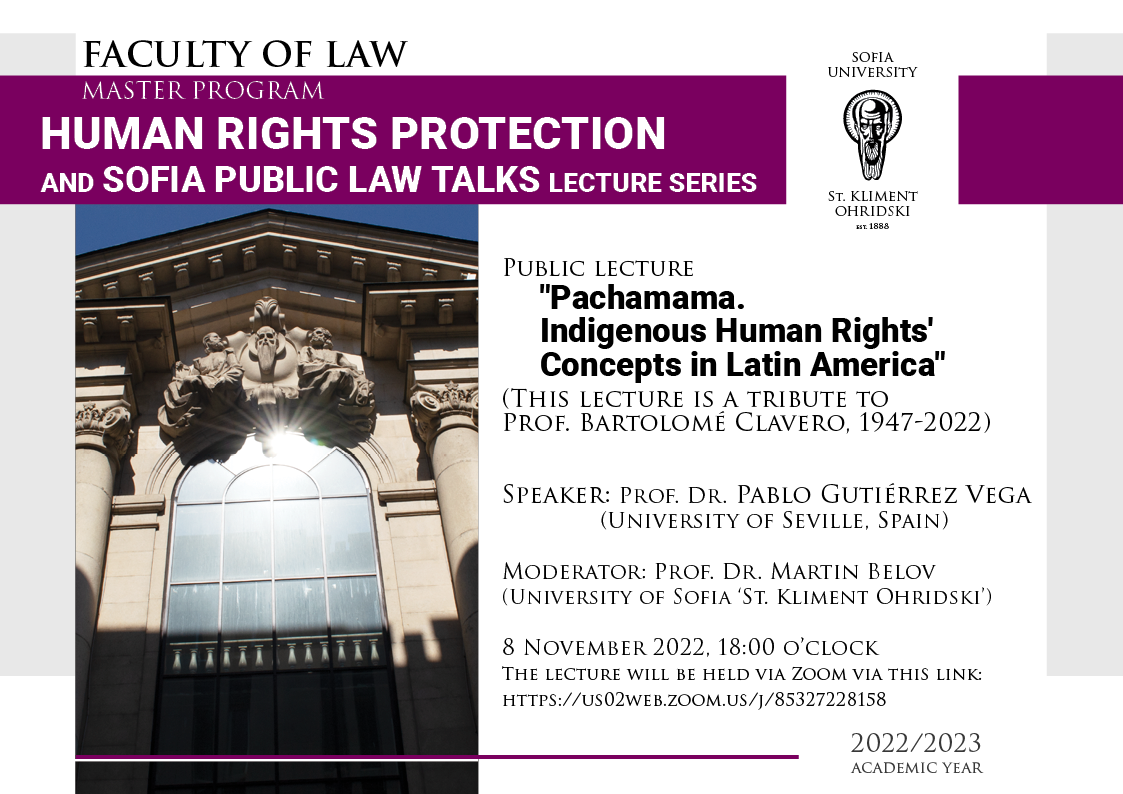 Pablo Gutiérrez Vega is a lecturer of Law at the University of Seville as from 1997, where he currently runs the Legal Clinic of Human Rights of the Law Department which is engaged in pro bono legal counselling and advocacy in the field of human rights, both at domestic and international level. He is member and founder of the University odf Seville's American Studies Institute (https://institucionales.us.es/ieal/) His main realm of academic interest is the History of Public International Law and Compared Constitutionalism, in particular in Latin America (namely Ecuador, Bolivia and Venezuela) and more specifically with regards to the rights of indigenous peoples, having acted as an United Nations' expert in the (still ongoing) study on treaties, agreement and other constructive arrangements between States and indigenous peoples. (Prof. Gutiérrez Vega has just participated as a short term observer of the OSCE Electoral Observation Mission. in the past Bulgarian 2022 early parliamentary elections)

February 22 was solemnly declared  the International Day of Mother Earth by the United Nations' General Assembly back in 2009.

This lecture aims at highlighting a gradually evolving paradigm in -primarily but not exclusively- Latin America, compared constitutionalism, whereby Mother Earth emerges as a (global) rampant right-holder per se. To a non negligible extent  this unparalleled stand is rooted in the emergence and rise of indigenous peoples' rights  within the International Law of Human Rights' agenda over the last three decades.

Unlike the 2007 UN Declaration on the Rights of indigenous peoples' rights, the  back then groundbreaking 1989 ILO Convention nr. 169 on the rights of indigenous and tribal peoples only sketched the thereafter categorized as a somehow conceptualizing trace the special relation to the land and natural resources. Indigenous understanding of the legal standing (if any) of 'Pachamama' (Mother Earth in kichwa, an Andean indigenous language) is indeed multifaceted across Latin America and intrinsically (almost) untranslatable to Western Legal Culture. However, not only recent constitutional endorsements such as the 2009 Bolivian Constitution (and the incumbent 2010 Act on the Rights of Mother Earth) seek to undermine  the so-called anthropocentric approach to sumak kaysay, that is (Planet's) well-being through a relatively original display of neglected (yet justiciable) State and community's duties; but also even more groundbreaking multicultural arrangements such as the 2017 Whanganui river record of understanding (which is materially constitutional) between the Maori people (actually one specific kinship) and New Zealand, openly addresses the legal personhood of a river and declares both actors as the acting guardians and tutors of the well-being of the river itself

This conference modestly assesses the conceptual and legal implications of the aforementioned special relation (of indigenous peoples) to the land and its natural resources and builds upon a seminal study on consideration and recognition of Mother Earth rights coauthor by Carlos Mamani Candori and Bartolomé Clavero (1947-2022), commissioned by the UN Permanent Forum on Indigenous Affairs in 2009 (published in 2010) and pays tribute to the generous and rich academic contribution of Prof. Clavero Salvador who unfortunately passed away the very same day I was kindly invited to give this conference within the Master Program Series led by Prof. Belov.